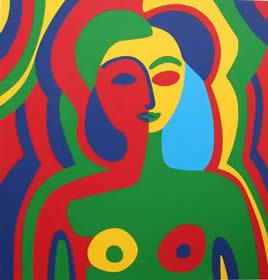 Ron's artwork has been featured on the cover of Palm Beach Illustrated (January, 1993) which also
featured him in a two-page article. He is listed in the ART IN AMERICA Annual Guide's and his work
has been seen in ART NEWS magazines.

Born in 1940, he started painting under the influence of his parents who owned the Renner Art Center
in New Jersey. Some of the artist who contributed to his style were Klee, Kandinsky, Kirschner, Nolde,
Miro, Picasso and Cezanne.

Although Ron started drip and splatter paintings in 1957, he had no knowledge of Jackson Pollock until seeing the artist work as portrayed on the cover of the Saturday Evening Post by Norman Rockwell in 1962. As a result of his disappointment in discovering another painter working tin the same style, Ron's drip painting style temporarily ended with "Splatter in Red" painted 1962.

Ron studied at the Philadelphia College of Art (1969-1973), majoring in Interior Design and Fine Arts, and also studied at Fleisher Art Memorial under abstract artist Tom Gaughan. At that time Ron decided to resume the style he independently developed in spite of Pollock's death in 1956 and fame that followed.

Artist Ron Renner is a Second Generation American Original. He currently paints in his studio located in Stuart, Florida.